It’s so simple, and yet it can take all day.

Some days, you might not even get very far.

When you master it, you’re called a “genius.” Then at 3am EDT, it resets, and you may struggle for the next 24 hours.

I’m talking about the game Spelling Bee, a simple but never simplistic game from The New York Times. It’s become one of those quarantine habits of mine, but the game’s been around for years, and I happened to discover it in March via a house ad on nytimes.com. Below, I’ll share some lessons that Bee players can apply to other areas of their work and lives.

First, though, here’s a tutorial. The format is always the same: six letters surround a seventh in a honeycomb shape. Below, from a recent example, are the letters N, T, O, A, D, and I around the center letter P. Your goal: make as many words as possible of at least four letters which all use the central letter. In the example below, TOP doesn’t work (too short), nor does TOAD (missing center letter), nor DOTPIN (I just made up that one) 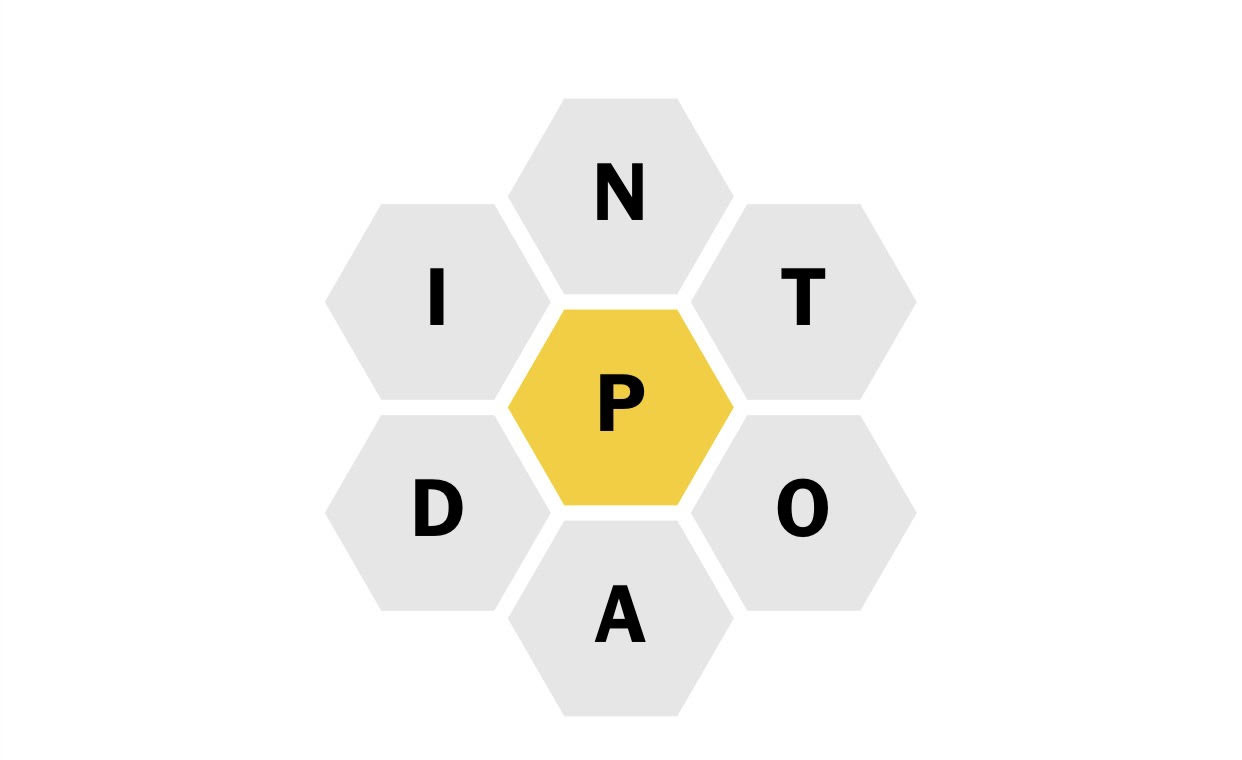 The money word is the “pangram,” a term which normally refers to a sentence or verse using every letter of the alphabet but here refers to one using every letter. You get seven extra points if you find a pangram, but you can reach the ninth and final scoring level without it. The required score for “genius” varies daily based on the total number of words and points in the puzzle.

For the puzzle above, I won’t give away the answers in case you’re determined to try it yourself. That day, I found 34 words, reaching “genius” with 180 points. Play the latest puzzle online or your phone though so you can see how you score.

Now that you know how to play, here are a few things I’ve learned from Bee keeping:

1) Give your mind a break. It seems like a cliché that when you give your mind a chance to solve problems in the background, it comes up with new ideas. I don’t think I’ve ever seen this play out so literally as it always does with Spelling Bee. While certain days are brutal to get through, most days, once I reach a stopping point, I return hours later and then instantly see new words. And then a couple of hours later, I’ll see other ones still. You don’t need to go for a walk in the woods or spend an hour doing yoga (good for you if you do either); go about your day and return later, and you’ll often surprise yourself.

2) Make mistakes on purpose to learn from them. As I write this, the day’s Bee puzzle has the letters O E A B K N with L at the center. I got some good ones (and yes, I’ll spoil this one). Often, I look for the pangram first to see if it jumps out, and ANKLEBONE was staring right at me. Then I got stuck, as usual, several levels from “genius.” I started making up some words. Once in a while, you get a surprise and learn something is a real word. But sometimes, mistakes reveal a new possibility. I wanted to write BALONEY, but there was no Y. Writing some random combinations like BALONE helped me see BALLOON — obvious perhaps, but it didn’t reveal itself to me. Wrong words lead to right ones.

3) Trust your instincts. Your mind often knows the answer before you’re consciously aware of it. After doing about 150 of these puzzles, I can almost always tell if the pangram is a compound word as soon as I look at the puzzle. In the puzzle I just referenced, I just knew to look for compound words. That usually means one part of the word uses the center letter and the other doesn’t, so it’s a cue to look for a word with the outside letters. BONE jumped out. ANKLE followed. It happened way faster than I can describe it. Don’t second-guess yourself. If you feel an answer but don’t know it yet, trust that feeling. It’s there.

4) Overcome illusions. Sometimes, you see things that aren’t there. One puzzle presented A G H L U P around a center M. I kept seeing LAUGH, which didn’t use the key letter. I got “genius” that day, first doing it without the pangram, and there was no “UGH” word at all. Seeing LAUGH wasn’t instinctive but illusory. You have to learn how to recognize the difference.

5) Savor doing it the hard way. I love starting with the pangram. It’s rewarding. It feels like you’ve got a legal performance-enhancing substance in you. Sometimes, like with the puzzle in the previous paragraph, it is stubborn. The first time I got “genius” on a puzzle without the pangram, it felt like defeat. The second time, I realized what a victory it is. Enjoy doing it the hard way.

6) The bigger the project, the more ways there are to beat it. A day where “genius” requires a low score like 60 is usually a quicker puzzle than a day where you need to hit 175. But sometimes it’s the reverse. With higher-scoring puzzles, you have more ways to beat them. Sometimes there’s even a second pangram, as is the case in the visual example above with P in the middle (do you see both?). There are many more ways to win a high-total puzzle since there are many more words you don’t need to see. Relish that when you have a big project in front of you, there are probably a lot of ways you can successfully get it done.

7) Have fun. There are some days where I’m convinced the puzzle creator listened to a George Carlin sketch and then tried seeing how many choice words can go in the puzzle. Some days, yes, you will see anatomical slang or sexist or racist slurs (no, none of those count, but I always wonder how many people guess them). It’s not all crass; sometimes, you’ll just wind up making up words. Recently, I texted a Bee addict friend about that day’s puzzle, “Spuds on a Spit: ROTATO.” Maybe you had to be there. But you can let yourself have fun — all the more so when you’re frustrated by not solving it.

See how much seven letters reveal?

I’m making my way through today’s puzzle. Let me know how you do with it, and, as always, let me know what you’re making of yourself.

But whatever you do, remember the number one rule of Spelling Bee: never send spoilers to that day’s puzzle.

Next story :How to Keep Making New Connections During the Covid Era